In this post I want to focus on how quickly we are actually recovering and what can we do to accelerate that process.

There's an awful lot of data and numbers being produced by trade organizations, by operators and also financial institutions and I think you need to be mindful that comparing yourself to some of that is not going to be useful. Just focusing on what what's going on within your business is probably the most important thing you can do right now, rather than trying to compare you to someone else.

Typical club groupings of members, pre pandemic, let's say this is a thousand members. You have your hardcore exercises, your enthusiasts, regulars, irregulars and your sleepers. 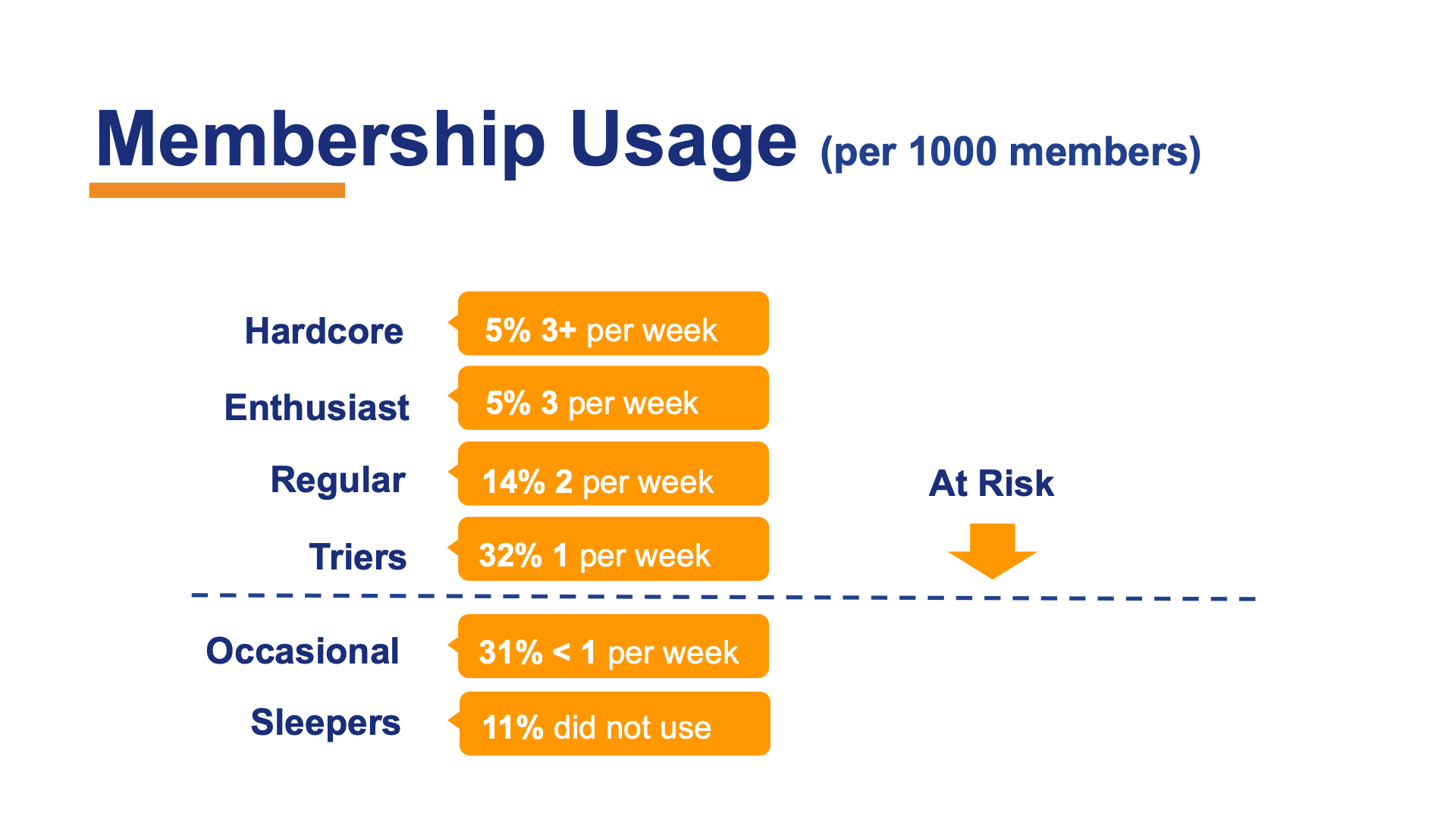 Once the pandemic hit, we saw was there was an overnight contraction of the business.

Within that, we came up with our descriptions, we talk about hard core exercises by visit frequency.

Then you have the enthusiasts, these are the people who are visiting at least three times a week. Then the regulars, visiting twice per week. The tryers, they are visiting once per week, but they are not really getting much further than that. The occasionals, they come in, not each week but perhaps two to three times a month and finally the sleepers.

If you have seen my sessions before, you will be aware of this ‘at risk’ line. We are able to predict that all those people who are below that line are at risk of canceling.

What we saw at the beginning of the pandemic was a lot of those people just disappeared overnight.

We are starting to see clubs reopen across the world with different types of restrictions. Some can open with group exercise, some without. Some have to use managed visits, so you have to visit by appointment. You have to book a time and a day and attended that time and day, otherwise you can't turn up.

There's no point in making these comparisons between each other because not every club is like every other club, but I want to you to look at the data and I want you to look at what we have seen generally in this recovery phase.

Once there's a lockdown period, obviously the membership falls away.

As you look at this chart, the grey line represents visit frequency of active users.

When we had lockdown, there was obviously no opportunity to visit and we have this great big hole in our membership data, but once we reopened we saw quite a big bounce back.

We saw a lot of people coming in, particularly in the early weeks of reopening and using it quite frequently but it wasn't evenly distributed. You don't get all of your members back all in one go. You get the hard core and the enthusiasts, they are back in. They are the ones who are in working out on day one and they will work out quite frequently after that, for a few weeks. In fact, they get back into their pattern quite quickly.

You then get the other people who are trying to visit more frequently and some of those have the opportunity to do that because of their working conditions. But we also noticed that that tends to drop away after the first seven weeks.

After seven weeks, we are seeing the numbers pretty much returning to pre pandemic figures. It might be that's the percentage of your members but remember your club might have shrunk by 30 to 40% of your customers.

Try and get as many of your existing customers back into their regular routine as quickly as possible. The reason I pointed this out is, I don't want you to think that suddenly with a massive influx and the clubs being busy, that everything's safe now. We are seeing positive recovery, but we need to sort of scaffold that. We need to support that for the long term not just repeat what is almost a new year. It's the equivalent of January, February, but at a different time of year.

We have also seen a large number of people coming in joining for the first time. These are new customers and they tend to have quite a high visit frequency in the early weeks as well but then they tend to drop off and down to pre COVID levels as well.

I would advise you tackle your members in slightly different ways based on their visit frequency. 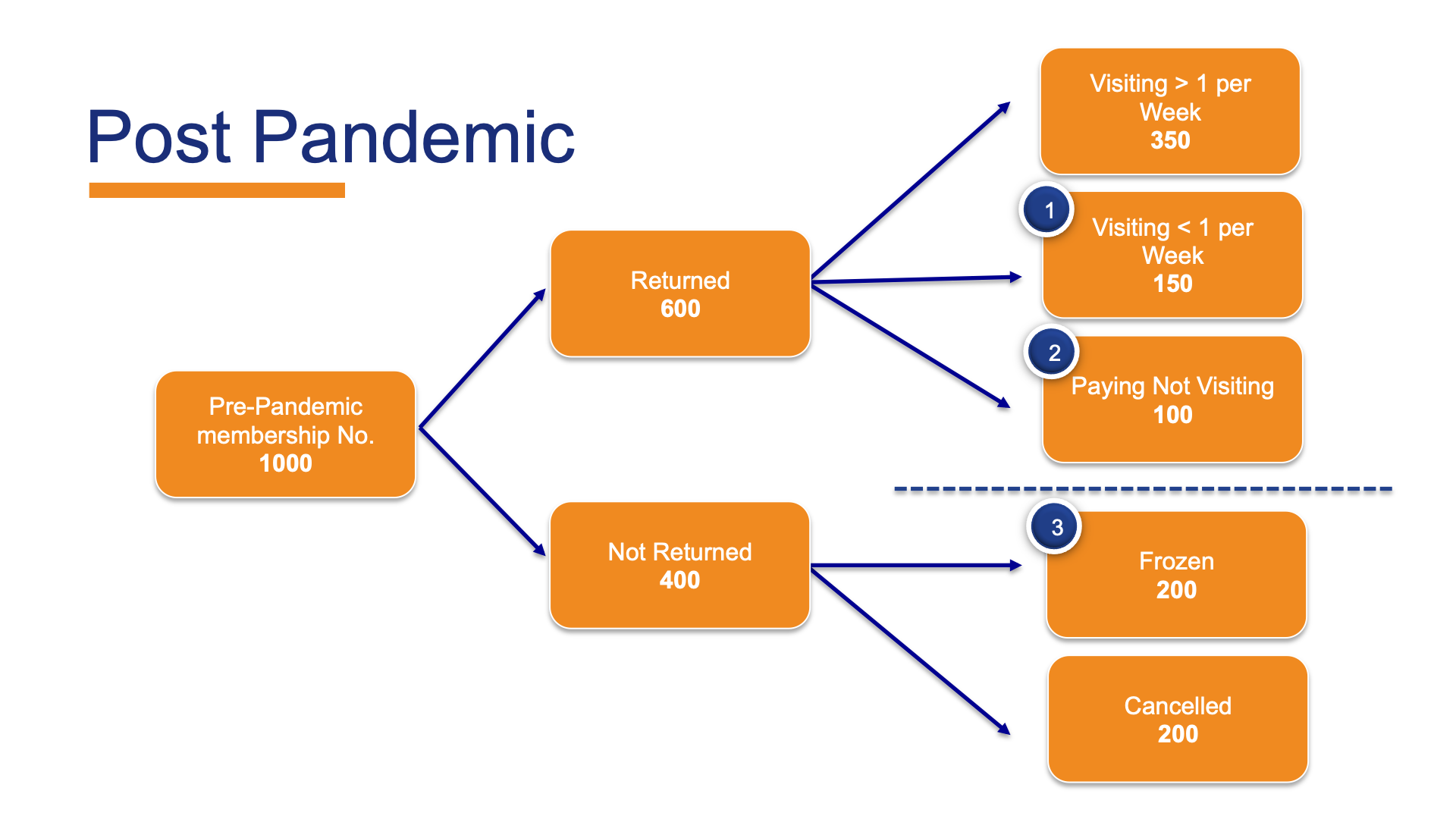 Assuming that you had a thousand members pre pandemic. Post pandemic, you've got 600 returned and 400 that have not returned. Of the 600 that have returned let's group those into visits and not visiting or low visit frequency.

Then look at the bottom two, those who have not returned, the frozen. They have indicated they want to stay members but they are not yet paying, which is slightly different from the group that was above them. Then you've got the canceled and for the time being, I wouldn't worry about the canceled.

I would suggest if you take these five groups, work on just three specific areas.

Start with those visiting less than once a week but are visiting.

Then focus on the frozen.

You are going to have the biggest and have the fastest bounce back if you tackle those three groups in that order, rather than trying to tackle your entire dataset.

Tips and tactics for increasing visit frequency particularly around those groups.

What we have seen is the 18 to 34 year olds, when we break them out as a group, they are coming back in response to challenges. If you set them a burpees challenge or a distance challenge or some sort of activity that they can set themselves up as a goal or something they can do as a group. They are going to return and they are going to participate in those types of activities.

You might then want to think about group exercise. Obviously with some clubs, some countries, people are under restriction, so it's more difficult to get more people in but you really want to promote your group exercise program and find ways of maximizing attendance.

You also want to introduce them to new activities, show them the new things you've got. If you are fortunate to live in a region in the world where you have outside areas now to exercise in, bring them in, this is sort of thing that's going to be really attractive to them.

When you are focusing on this group, give them recognition for their behaviour. Recognise that they have been coming in and get them to re-establish their goals.

What are their goals post pandemic? Have they changed, check back in with them. See if there's a group of people all trying to get to the same place.

A lot of people now are saying they are focusing more on health than they are on fitness. Find ways of communicating that with them and perhaps just give them three month targets, don't give them 6 month, 12 month, 18 month long-term goals. Give them shorter and medium term goals to focus on.

The final group you want to tackle is the over fifty- fives. Get testimonials, particularly try and get video testimonials about their joy about being back in the club and what they missed.

We are using a tactic from sales, which was 'Be a friend, bring a friend', which has traditionally been used as a referral program. We recommended you Try

'Be a friend, bring a friend back.'

You are trying to get existing customers to get their friends who are members who are either visiting less frequently or not visiting at all or a frozen to come back and use the club.

If you can, turn those people into a news story, the press seem to love images and pictures of older adults exercising and getting on with things particularly if you've got video of your 81 year old mum doing chin-ups or someone deadlifting who doesn't look like someone who would normally deadlift.

Turn those into news stories because you are trying to reassure people that it’s safe to get back in and train again. You want lots of pictures of people, lots of smiley faces and lots of positive comments. 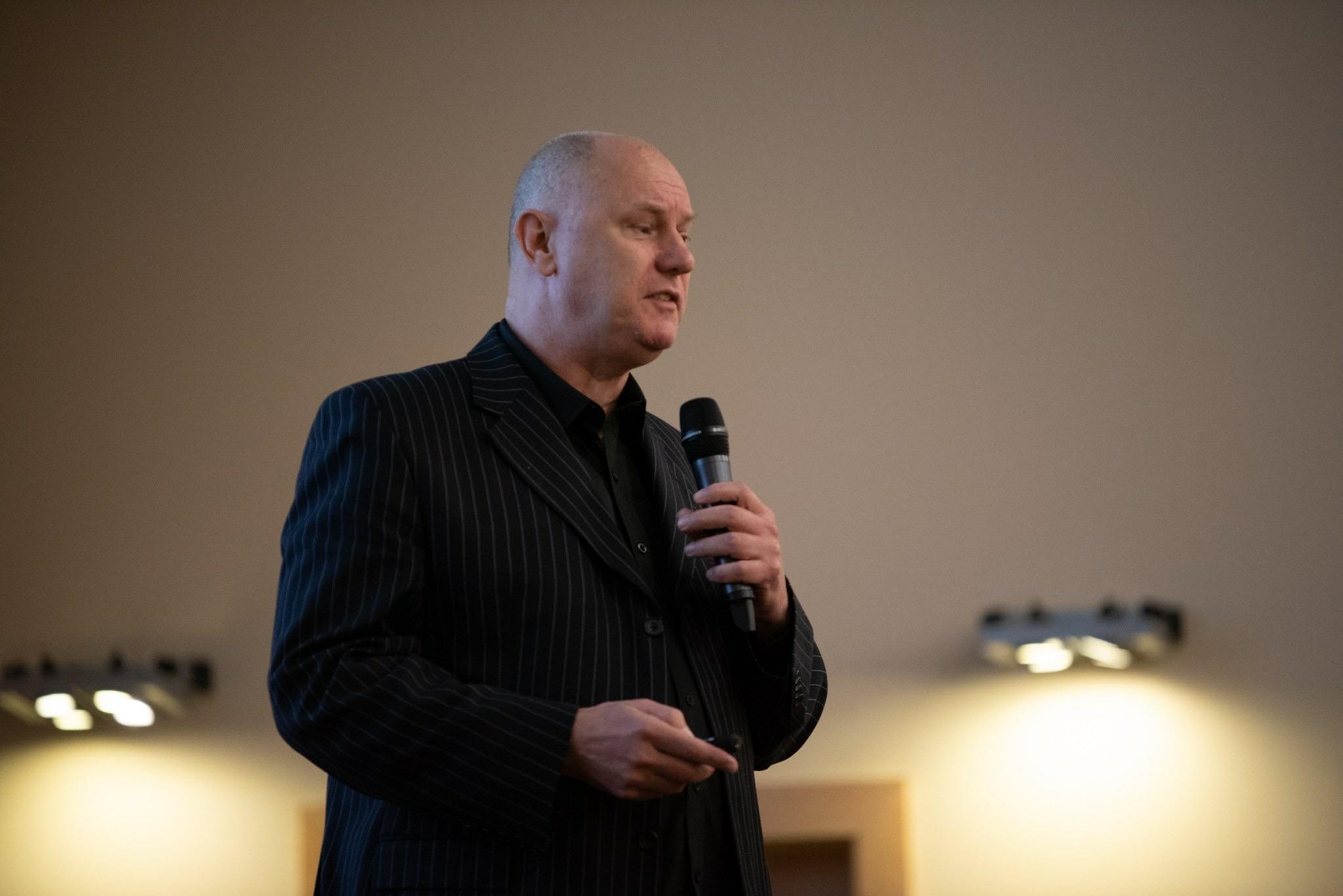